13 Apr Green Card after being denied for Agricultural worker amnesty

Salvador Miscala and his wife, Marla Miscala first entered the United States on October 05, 1985 on a visitor’s visa. Salvador worked in the farm for six months after his entry. He applied for agricultural amnesty program and he was issued temporary work authorization. While his case was being processed, the contractor he worked with went out of business. There were documents that were not made available to him and his case was denied. Thereafter, he sought the assistance of Atty. Crispin Caday Lozano to appeal his case. While the appeal is underway, Atty. Lozano used the method of “double petitioning” to improve their chance of getting a green card. 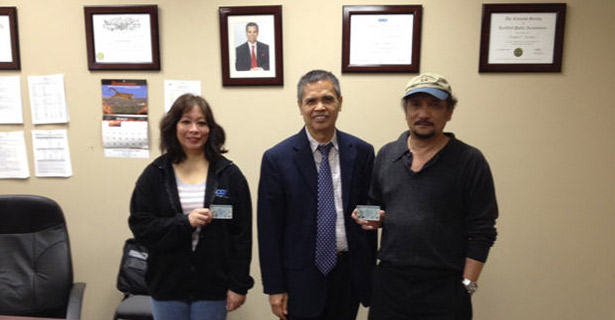 Atty. Lozano explained to the Miscala’s that in order to strengthen their case he has to file all reliefs available. Double petitioning means the applicant will file on two different reliefs and whichever comes first will be the petition where they will get their green cards. With the help of Atty. Crispin C. Lozano, he was able to have their application for green card approved based on the petition of their daughter who became a U.S. citizen while the appeal is underway. Salvador and Marla Miscala received their green cards on February 2012.

“We are very grateful because without the help of Atty. Crispin C. Lozano, we could have encountered many difficulties in applying for our permanent residence” Salvador Miscala said.