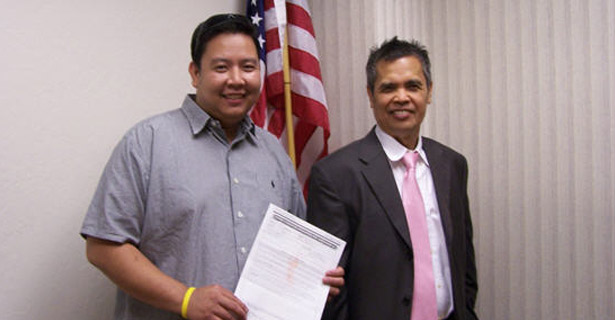 Roman Javier entered the United States on a tourist visa on February 6, 2006.  He married his U.S. Citizen wife, an active military servicewoman on August 24, 2007.  Mr. Javier and his U.S. Citizen spouse previously hired another immigration lawyer to process his Form I-130 immigrant petition and adjustment of status Form I-485 application.  Unfortunately, it was denied and Mr. Javier was placed in removal proceedings.

Upon receipt of his Notice to Appear in Immigration Court, Mr. Javier immediately hired Attorney Crispin Caday Lozano to handle his immigration case.  Mr. Javier went through a series of challenges to get his Form I-130 petition approval.  The USCIS claimed that his marriage with his U.S. Citizen spouse was a sham.  Immigration Officers did ocular visit to their residence, interviewed neighbors and even checked on the Facebook accounts where both claimed “Single” on their status.  With the expertise and diligence of Attorney Crispin C. Lozano in handling immigration cases, he was able to prove after several Notices of Intent to Revoke that the marriage between Mr. Javier and his U.S. Citizen spouse was entered in good faith.  With voluminous and substantial evidence of good faith marriage submitted, the USCIS finally approved the filed Form I-130 petition.  Upon approval of the I-130 petition Atty. Crispin Caday Lozano immediately requested the Immigration Court for a hearing to adjust his status.  On the hearing date he was granted lawful permanent residence.