Green Card approved after 9 years of fighting removal (deportation) from the U.S.A. 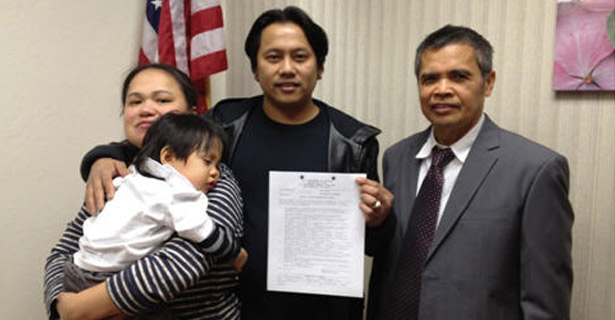 Mr. Ericson Mendoza immediately sought the services of Atty. Crispin Caday Lozano to help him remain in the United States to be with his US citizen spouse.  Atty. Lozano wasted no time in filing an appeal with the Board of Immigration Appeal (BIA) on the denied I-130 petition.  While waiting for the decision the Sheila gave birth to a son from Ericson named Sean Maverick.  Atty. Lozano immediately sent the birth certificate to the BIA for proper consideration.  After two years of waiting for the decision, the BIA approved the appeal and sent the case back to the Immigration Court for continued processing. Based on the approved appeal on October 2011, Atty. Lozano followed up with USCIS to schedule the couple for an interview. Before the interview Atty. Lozano prepared voluminous proof of good faith marriage including proof that his wife has anxiety disorder that caused her to forget past events that resulted in the inconsistencies in their prior testimony.  On the date of the interview the USCIS still has a doubt on the validity of their marriage.  Attorney Lozano offered to the USCIS a DNA testing between Ericson and his son as proof of good faith marriage. The DNA proved positive of the father and son relationship.  Based on this proof the USCIS approved the I-130 petition on October 2011.  Thereafter, Atty. Lozano requested the Immigration Judge for an earlier hearing date because the Immigration Court is backlogged.  The motion was granted and Ericson was scheduled for a hearing immediately.  On the hearing date Atty. Lozano was able to have the application for permanent resident of Ericson Mendoza get approved on April 02, 2012.  Ericson Mendoza said”Without the assistance of Atty. Lozano, I would have been deported and I would not have my wife and son with me.  I thanked Atty. Lozano for this great gift in my life”

Mr. Ericson Mendoza waited for his green card for nine long years.  He was able to achieve his American dream and now can live a peaceful and comfortable life with his wife, Sheila and son, Sean with the help and immigration expertise of Atty. Crispin Caday Lozano.