Reynaldo Mago reunites with his children

My name is Reynaldo Mago and I am very grateful to Atty. Crispin C. Lozano and his staff for working hard on my immigration case He and his staff were very meticulous, hardworking and efficient.  Because of Atty. Lozano’s immigration experience and expertise, it is indeed a Merrier Christmas and Happier New Year for my children and I because after 19 years of separation, my two children arrived on November 2012 based on my petition. 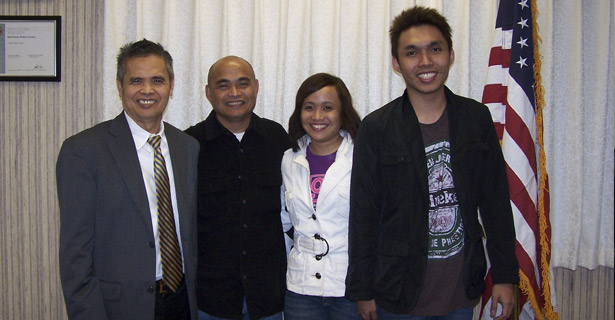 I was petitioned by my U.S. citizen father on July 22, 1985 when I was single. I entered the United States on June 8, 1991 with an immigrant visa as an unmarried adult son of a U.S. citizen.  However at the time I entered the U.S., I was already married since January 18, 1989.  I married my wife, Gloria Mago, to avoid my children from becoming illegitimate.  Because of this misrepresentation, I was sent to removal proceedings.

Atty. Crispin C. Lozano represented me in my removal proceedings.  In my Individual Hearing on December 22, 2011, Atty. Lozano presented voluminous documents to qualify me for a waiver including presenting my old mother to testify in court.  After the hearing, I broke into tears of joy when I heard the Immigration Judge approved my waiver request.  This is the best Christmas gift I ever received for me and my family on December 22, 2011.

The Law Offices of Crispin C. Lozano did not waste any time to inform the USCIS of my granted waiver so they may immediately process the I-130 petitions of my children.  Atty. Crispin Lozano worked hard based on CSPA (Child Status Protection Act) so that my children’s preference category could remain under F2A, unmarried children under 21 of a lawful permanent resident, despite the fact that my children were already over 21 years of age at that time.

Based on continuous follow up and hard work from Attorney Lozano’s office, the USCIS approved my children’s petition under F2A.  My children, Ray John and Reigell, entered the U.S. on November, 2012 with an immigrant visa as unmarried child under 21 years old of a lawful permanent resident. When I picked up my children at the San Francisco International Airport, I was so happy and with tears of joy when I finally met and hugged them.